The setup at a bris varies from mohel to mohel, and from tradition to tradition.


In most Ashkenazic brisses (where the husbands family is of Eastern European or Russian descent), the setup will consist of two chairs and a table. Good lighting is always appreciated.


Depending on the mohel's preference, the table will be on either the left or the right of the chairs.


One chair is used by the sandak, who holds the baby during the actual circumcision. 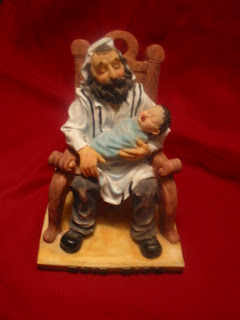 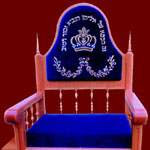 [See other examples of this chair here]
Standard Sefardic
Those who descend from Spanish Jewry, North African and Middle Eastern lands will usually have the table and the Elijah Chair, and will use the Elijah chair twice - first to put the baby on Elijah the Prophet's "lap," and then for the sandak to hold the baby during the bris.
Additional Items
Some have the custom to light candles.
Some set up a dish with dirt in it, so the excised foreskin may be placed in it - a prelude to its being buried shortly after the ceremony.
Modern Ideas
In different circles (mostly non-Orthodox), where many mohels happen to be physicians and are more used to babies being "out of commission," a circumstraint might be used to contain the baby's movements.

I don't recommend this device.
Others opt to have the baby held on a table for the procedure.
Finally, it is recommended to put a tablecloth on the table and a wastebasket under the table in case there is a need to dispose of any waste-filled diapers, sterile packagings, or used bandages.
Posted by A.B. at 1:07 PM