A while back, I blogged about having multiple brisses or twins or triplet brisses.

Most brisses are, as you can imagine, single-serving affairs.
But I had the privilege to preside over a "twins" bris once again recently, and when I saw the babies with their mother after they had eaten post-bris, I couldn't resist taking this picture. 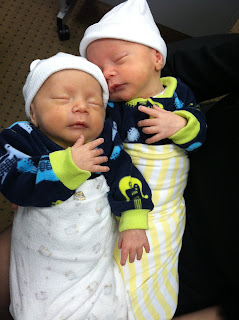 Makes you want to have twins. Doesn't it?

These guys are extra special, because as twins, they shared the same sac and placenta. You can't get any closer than that. Their parents named them David and Yonatan - like the two Biblical characters who cared so deeply for one another, whose love for one another is described by the Rabbis as "A love that is not dependent on anything."
Posted by A.B. at 9:14 PM