I get this question a lot, and I think it's time to clarify what the tools of the trade are. I have blogged about the different methods utilized in bringing about the coveted circumcision result.

Here I will simply distinguish between the largely rabbinically approved, lauded and recommended device which is called a מגן - a Magen - a shield (in Hebrew).  And the "Mogen Clamp" developed by the mohel, Rabbi Harry Bronstein in the 50s (or thereabouts).

Here is a link to photos of shields. (here too - though you get the full gamut of supplies) The basic gist is that a shield is a solid metal plate (once made of silver, but now more often made of steel) with a thin slit that divides the shield in half.

THIS IS THE ONLY KIND OF SHIELD FOR THE GLANS THAT I USE.
I DO NOT EVEN OWN ANY OF THE FOLLOWING DEVICES

The Clamp - AKA the "Mogen Clamp" or the "Bronstein Clamp"

I include the following photo to contrast the Gomco Clamp (on the top), to the Mogen Clamp. The Gomco Clamp is more often used by physicians in hospitals, particularly as the device of choice in routine circumcisions. There are those who use the Mogen Clamp in hospitals as well. Both devices (if used) should only be used by those who know how to use them very well, as the potential dangers of each could be quite disastrous. 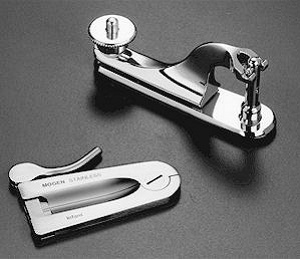 Having said all that, here are two photos of the Mogen Clamp, one which is in the closed position, while the other is.... open! Note the clamping arm which closes the device, crushing the foreskin, killing all the bloodcells, and essentially amputating the skin pre-incision.

Rabbi Bronstein created this clamp, as the story goes, in order to provide an alternative to those looking to have a traditional bris without all the bleeding. The plan backfired because most rabbis felt that the pain involved in the clamping mechanism was much worse than anything mandated by the circumcision itself. Not only that, but the Talmudic requirement for there to be blood at the bris is incontrovertible.

I will add that the potential irreversible danger that is posed to the glans should it get caught during the clamping is a thought I don't want to ever entertain as a possibility - and believe me I have heard my share of bad stories, which I prefer not to write about.

MOST TRADITIONAL MOHELS (AND I INCLUDE MYSELF IN THIS CATEGORY) - MOSTLY ORTHODOX MOHELS - WILL ONLY USE THE PLAIN SHIELD, WITHOUT AN OPTION FOR A CLAMPING MECHANISM. WE KNOW HOW TO DEAL WITH THE BLEEDING, TO KEEP IT TO A MINIMUM. AND, WITH PROPER TRAINING AND A LITTLE COMMON SENSE, THE GLANS IS NEVER NICKED IN THE PROCESS.

THERE ARE SOME ORTHODOX MOHELS WHO USE THE "MOGEN CLAMP" - EITHER CLOSING THE CLAMPING ARM COMPLETELY, PARTIALLY, OR NOT AT ALL. SOME WILL SHAVE DOWN PART OF THE INSIDE OF THE CLAMP TO ALLOW FOR A LITTLE MORE BLOOD CIRCULATION AND TO PREVENT THE COMPLETE CRUSH THAT A REGULAR CLAMP MIGHT OTHERWISE GIVE.

As a parent, you have the right to decide what method you want at your son's bris - understanding that the clamps are not rabbinically sanctioned. The mohels who use them are either "only" trained to use them or use them out of convenience - either sometimes or always - to minimize bleeding and to "get the best looking circ" out there (though in truth this is never a guarantee). Though I did speak with one mohel who "swears by it and wouldn't do it any other way." Have a discussion with your mohel (and perhaps your rabbi). If you want either method, either be prepared to fight for it (and possibly to switch mohels if he can't accommodate you) or be ready to give in to what he is comfortable with. I personally only operate with the traditional shield. I don't even own a clamp.

Which works for you? Talk it over with your spouse, and make sure to discuss with your mohel if it is not made clear what his method is...